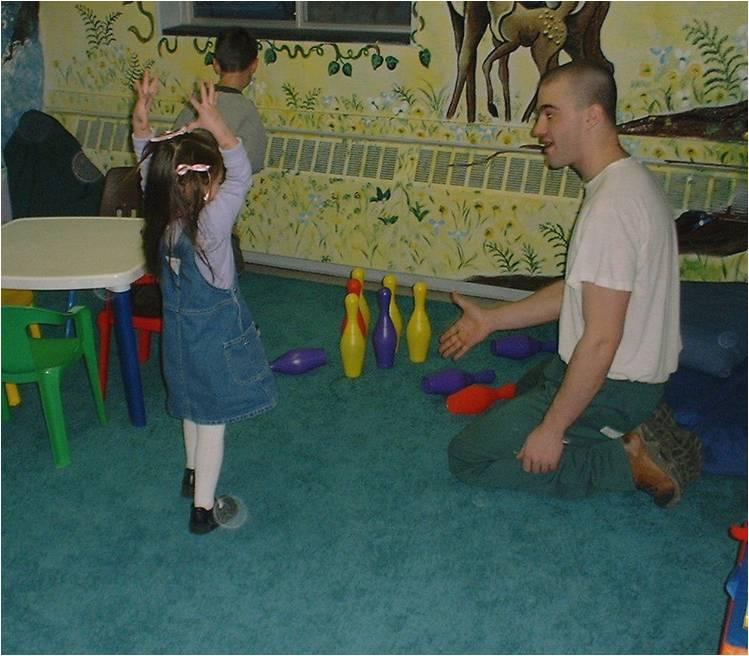 The Family Connections Center's mission is: To strengthen the connection between incarcerated parents and their families while facilitating ties to their community through education and support.

In 1998, the Families with Incarcerated Parents Project partnership was forged between the University of New Hampshire's (UNH) Department of Human Development and Family Studies, UNH Cooperative Extension and New Hampshire's Department of Corrections (NH DOC). This partnership led to the creation of the Family Connections Center (FCC), now located in Concord and Berlin's male state prison facilities and the Goffstown facilty for women, and managed jointly by the Department of Family Studies and the NH DOC. The FCC offers programs and services to incarcerated parents and their families. Approximately half of the funding for FCC comes from the NH DOC, and the other half comes from various grants and donations.

Over the past 12 years, the FCC has offered an evolving array of services which have included parenting education classes, weekly parenting support groups, one-on-one virtual/video visits between the incarcerated fathers and their children, recording books on audiotape/cds, life skills seminars presented by volunteers from the community, relationship/communications courses for couples in the prison together, or separately, family mediation in preparation for the father's release into the community and back into his child's life and staff support to the partner and caregiver of the children in the community.
END_OF_DOCUMENT_TOKEN_TO_BE_REPLACED

In 2001, FCC became a member of Family Support NH. Family Support NH is a network of family resource centers and family support programs within the state of NH. This network's goal was created to establish a common vision for family support programs across NH. This membership has provided the FCC a built-in referral service for families who are experiencing incarceration of a parent or the release of a parent from prison. This group also works with legislators to advocate for at-risk families.

From 2006 to 2011, FCC partnered with Child and Family Services (CFS) to collaborate on a Federal grant to expand programming to men's prisons in Concord and Berlin. CFS is the oldest children's charitable organization in NH and the largest independent human service organization in the state. Over the past 5 years, CFS has provided home visiting and relationship classes to caregivers and partners of incarcerated fathers in NH's prison facilities.  FCC currently partners with CFS to provide programming to incarcerated mothers and facilitate the CIP Summer Camp.

The FCC has a longtime working relationship with NH DHHS Division of Children, Youth & Families (DCYF). FCC and DCYF have collaborated to help support children in foster care who have incarcerated parents.